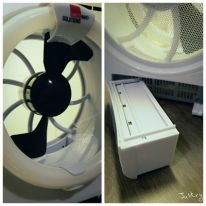 The catcher emits ultraviolet light, which attracts flies, moths, mosquitoes, midges and other flying insects. They are sucked into a container by a fan and they die by dehydration.
Uses no chemicals, or poisons; generates no fumes, or odours; causes no pollution.
It has a slim, compact and modern appearance and is ideal for use in any room in the home. It is also perfect for industrial and commercial premises like factories, offices, grocery, meat and fish shops and hospitals.
Safe for people and pets.
Covers an area of 80m2
Environmentally friendly insect killer without chemicals
The insect trap is an extremely practical solution for the control of flies, mosquitoes, etc., since it works completely without attractants. This has the double advantage that no bait needs to be bought and the impact on the environmentis less as no poison is used.

The ultraviolet light attracts insects effectively and the airflow of the fan kills them. This insect trap is especially recommended in rooms with a high number of insects. With a range of 80 m², the insect trap covers even large areas completel

Effective use of ultraviolet light
This product was designed by SWISSINNO in such a way that it does not pose a threat to humans or animals. Furthermore, it has no impact on the atmosphere in the room and does not give off any odours.

Insects may become immune to some chemicals or poisons and thus the situation may worsen over time. Since our LED insect trap works with ultraviolet light and kills with an air stream, this risk is completely excluded.