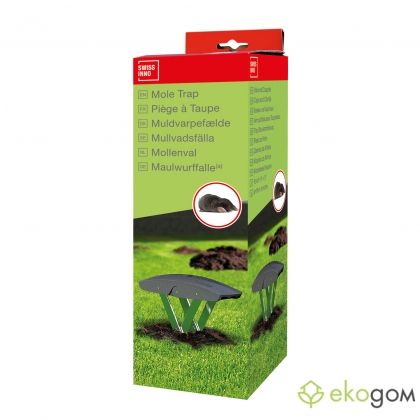 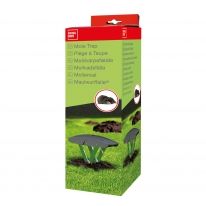 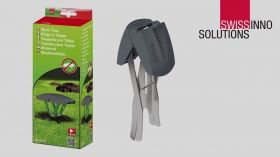 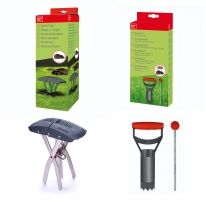 The SWISSINNO Mole Trap has the following features:

THE MOLE TRAP SUPERCAT IS EFFECTIVE AND RELIABLE

The SWISSINNO Mole Trap has the following features: Quick and easy to set up and no great strength is needed. Catches moles in both directions. Gives a clear above-ground visual signal when it has been activated: the ‘wings’ drop down to the sides of the trap. Safe for users and pets. A serious weapon for use by hunters and professional pest controllers. The trap integrates into the mole's tunnel network and needs no bait to work successfully. When the mole nudges the set trap, it slams shut with great force and kills the mole instantly with a powerful blow. It is efficient, effective, safe and environmentally friendly. Warning! In Germany and Austria, moles are a protected species and it is illegal to trap them. Note that you must not set traps where moles are around. Potential damages caused by moles. What significant damage moles can cause many affected people notice only too late. Therefore, here are some of the most common damages by moles: Damage to drainage systems, watercourses, dam banks and coastal defences through tunnelling in flood banks etc. Damage to grass airstrips, over-run areas around tar macadam runways, amenity and sporting grassland etc. Moles are a nuisance and a threat to safety by caus1ng unevenness and a risk of subsidence. Damage to mowing and baling machines caused by molehills. Reduced quantity and quality of silage, which can be spoilt and rendered unpalatable by contamination with the soil from molehills. Detrimental effect on animal production Threat to hygiene in animal husbandry as the soil excavated by moles exposes foreign bodies including the causative agents of diseases, e.g. listeriosis or botulism, which might be ingested by grazing animals e.g. sheep, cattle and horses. Damage to buried cables e.g. road traffic signal cables. Trigger underground security systems. Disturbance of archaeological strata. Secondary use of mole tunnels. Weasels may use mole tunnels to gain access to game-bird rearing pens. Moles and their tunnels can also be precursors of infestation by voles and field mice. Control moles effectively The SWISSINNO mole trap means you can combat moles in the garden, without the use of poison or pesticides. Like all our SuperCat products, the mole trap is extremely effective and rapidly achieves results. Once the mole trap is positioned and correctly installed in the passage system, the trap is active and catches the first mole as soon as it passes the trap. It does not matter from which direction the mole goes into the trap, since it is accessible from both sides. So you can combat moles without luring them with a bait. Professional pest control Our intensive development and many years of experience have allowed SWISSINNO to develop an optimal mole trap, which is also used by pest control professionals. The trap works simply and effectively, kills moles quickly and is immediately ready for use again. Since it works without bait, poison or chemicals, our mole trap is extremely practical, environmentally friendly and requires no maintenance. All you have to do is check whether a mole has been caught and if this is the case, it must be removed and the trap re-set.